Marissa Mayer, the former CEO of Yahoo, once summed up the significance of user experience (UX) as ‘the utmost thing of an application.’ And, why not! By all means, an application or software is only ever as good as its UX. Even if an application has the most innovative and leading-edge technology, it will never fulfill its potential unless it is user-friendly.

And it is indeed this acknowledgment that has put UX in the front and center of application development today, even in the industries that are not conventionally user-experience focused. For instance, aerospace and defense is one such industry that has long been focusing on their applications’ underlying technology and functionalities, overlooking the aspect of UX. As a result, their applications have been putting forth enormous usability issues. There have been instances where the U.S. Department of Defense (DoD) had spent millions of dollars on applications only for them to fail the operational acceptance testing. As its critical missions depend on users’ ability to accomplish goals swiftly and effectively, the DoD and defense contractors have increasingly begun to integrate user-centric design best practices, services, and tools. Incredibly, a UX design company that is playing a phenomenal role in meeting the demands of this paradigm shift is Rocket Communications.

Rocket Communications is a woman-owned enterprise UX design firm that focuses on the design of mission-critical applications and systems. The company works with the leading defense contractors and Space and Missile Systems Center (SMC) today to improve the UX of Enterprise Ground Services (EGS) baseline applications, which allow command and control of Air Force satellite systems. “With Rocket Communications by their side, the pool of researchers and developers working on these applications can focus on the core functionalities rather than the design elements. This ensures modern, consistent, and user-centric design; while also accelerating software development,” states Kevin Hause, COO at Rocket Communications.

But how it all started?

Rocket Communications’ story was lifted off in 1992 by Michal Anne Rogondino. Michal Anne, after launching her career in Apple, founded Rocket Communications to focus on UX design for enterprises. The firm soon carved a niche for itself by creating leading-edge enterprise UX designs for applications and software of the corporate sector, which have provided a significant competitive advantage to hundreds of leading organizations, including Microsoft, Cisco, Intel, HP, Oracle, and FireEye. Leaning on this wealth of competencies, Rocket Communications has made a name for itself today in the corporate as well as defense sector by providing state-of-theart UX designs.

What has enabled Rocket Communications to be the face of UX in the aerospace and defense sector is its UX design system for space applications – Astro UXDS. Rocket Communications created Astro while working for SMC, and has since been supporting it with continued enhancements. Notably, the design system has played an instrumental role in SMC’s efforts to eliminate its system stovepipes and enhance information exchange. While offering the best-of-breed UX design solutions, Astro has simultaneously succeeded in implementing a unified standard for all web application design and development projects of SMC.

Hause further explains it by presenting a perfect analogy. “While MS Office applications, like Word and Excel, have different functions, their navigation paradigms are more or less consistent. It enables a user who has used one application to operate the other one fairly quickly,” mentions Hause.

Likewise, the design and development teams creating space applications can utilize the key patterns, components, and iconography in Astro as the foundation for their product UX designs, which will, in turn, create design consistency across all the applications of SMC.

To bring such successful and intuitive UX designs into reality, the team at Rocket Communications interacts with the end-users of the application to get a complete comprehension of their expectations, workflows, and goals. Rocket Communications team then molds the design directions and strategies accordingly, and they call this process – LaunchPAD. The team continually iterates on these end-user requirements to narrow down the broad range of initial ideas to specific necessities that need to be followed.

Hause notes that while it might sound like a time-intensive process, it’s actually time well invested. “Devoting the time early on to make sure that the development and the designs are going in the right direction saves countless hours down the road, and is a far more efficient way to develop software,” he adds.

The unique value proposition of Rocket Communications’ user-centric design principles can be best reflected through a recent client success story. “The Air Force spent a considerable amount of time and money to develop a new software tool that combined the functionalities of a couple of their antiquated tools with some additional features,” says Hause. However, once developed, the tool failed the operational acceptance testing as users found it hard to operate. The Air Force onboarded a large defense contractor to rebuild it. Based on previous successful UX collaborations, the client utilized Rocket Communications’ Astro Space UX Design System and services to rebuild the application. “Not only was it successfully adopted by the Space Force satellite systems, but the client was also elated, as their development time and cost achieved a 30 percent improvement with us while relating to their other similar projects,” asserts Hause.

Such frequent collaborations with the DoD and the demanding nature of those partnerships have empowered Rocket Communications to consolidate its stature as the ideal UX design partner for mission-critical applications. Interestingly, Rocket Communications is also one of the few companies selected by the British government to improve its mission-critical applications. Driven by industry recognition, the firm is now working on developing more specific tools that would allow its clients to incorporate UX best practices into their operations. “Our expansive expertise in the domain not only enables us to support but drive enterprises and defense applications’ user-centric design and development principles,” concludes Hause.

Description
Rocket Communications is a woman-owned enterprise UX design firm that focuses on the design of mission-critical applications and systems. What has enabled Rocket Communications to be the face of UX in the aerospace and defense sector is its UX design system for space applications – Astro User Experience Design System (UXDS). Rocket Communications created Astro while working for SMC, and has since been supporting it with continued enhancements. While offering the best-of-breed UX design solutions, Astro UXDS has simultaneously succeeded in implementing a unified standard for all web application design and development projects of SMC 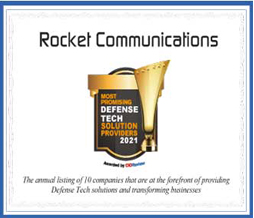 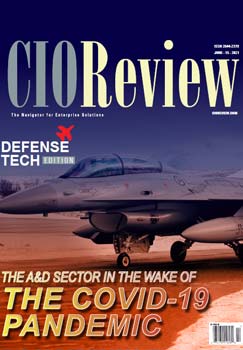