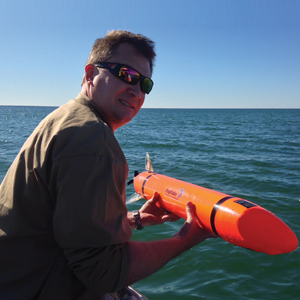 Jeff Smith, CEO
Rising instances of oceanic warfare are opening up a new market to create underwater vehicles that promote a deeper understanding of the undersea world. Unmanned underwater vehicles (UUV) can search out mines much quicker and with greater efficiency than a team of human divers, as well as perform a range of other functions, such as persistent surveillance and anti-submarine warfare among several others. While larger vehicles capable of withstanding underwater pressure are increasing in demand, a gap was noticed in the smaller low-cost vehicle space. Riptide Autonomous Solutions, a start-up, bridges this gap by introducing state-of-the-art electronics and processing capabilities in smaller vehicles. Riptide currently offers a smaller and more affordable vehicle which not only endures high oceanic pressures but also provides greater endurance than any other vehicle previously envisioned.

Earlier, the U.S. Navy, which is their chief client, had to rely heavily on large, expensive vehicles to meet its defense needs as smaller vehicles hardly had the required degree of longevity. The effectiveness of the underwater vehicle depends upon its efficacy in carrying out required tasks, which in turn depends on the vehicle’s sensors. The latest single-board computers and low power processing combined with Riptide’s commercial processors and unique methods of engineering and packaging make the vehicles both highly capable and highly flexible. This provides users with a reliable and robust platform to advance technology development.

Riptide is distinguished by the fact that its sensors form the major part of the vehicle’s cost and power consumption, whereas the vehicles of other companies tend to dominate the system’s cost and power budget. Jeff Smith, CEO of Riptide Autonomous Solutions, explains, “We create a vehicle around the sensor and application, which enables us to wrap a custom solution around the sensor to optimize it for to the desired mission endurance, driving higher data collection rates.” Riptide’s major challenge was to make the undersea vehicles, which historically cost a few million dollars, available in the range of ten thousand dollars without compromising on their capabilities.

The company’s success has been driven by its emphasis on hydrodynamic and electrical efficiencies, achieving endurances greater than anyone has yet seen. “We have utilized hydrodynamics and an electrical architecture to enhance the efficiency of our vehicles. Our vehicles perform nearly two to three times better with the same propulsion power than similar sized vehicles,” says Smith. While most vehicles can tolerate only a few hours of mission time, this feature allows Riptide’s vehicles to last for days. A flexible framework with the ability to run sonars, oceanographic sensors, and neutralization packages forms the basis of Riptide’s devices, which is further enhanced by the larger commercial development efforts around additive manufacturing, communications, commercial electronics and smartphone technology.

By focussing on smaller, lower logistic UUV systems having greater ranges, we look forward to opening up the ocean to make it affordable for exploration and discovery

Riptide’s rise to the top of a highly competitive market was remarkable. Within a mere six months of coming up with the micro-UUV, it had already created three classes of vehicles; larger vehicles that had more power and were functional for longer durations, vehicles handling greater payload, or both. The depth ratings of the different vehicles, however, vary—while nylon vehicles can withstand up to 1000 feet deep, trials are being made with 3D printed metal vehicles which can achieve 5000 feet. Riptide anticipates fielding 3D printed titanium vehicles this year that can endure full ocean depth.

Three new products are also on the anvil. While they are currently envisioned as smaller, shallow-rated affordable vehicles, the products will eventually be extended to deep-rated, full ocean depth systems. “By focussing on smaller, lower logistic UUV systems having greater ranges, we look forward to opening up the ocean to make it affordable for exploration and discovery,” concludes Smith.

Description
Designs UUVs and other autonomous marine robots for defense, research, and exploration of the world’s waters 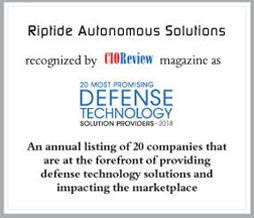